GlobeViewer Mars is an interactive and three-dimensional globe of the entire surface of Mars. The 3D global map shows all official designations for various surface features. If you are interested in a specific region, an even higher resolution local 3D map view can be loaded for a closer look at the craters, mountains and other formations in 3D. In addition, a mission log of all Mars missions since 1960 has been included.

Four map modes are available (elevation display, photo display, a combination of both and the gray color mode). In addition, surface details (normal maps) have been obtained from the elevation data for the display, which can be combined with all map modes. Even the smallest craters, elevations, grooves and gorges are visible on the map. 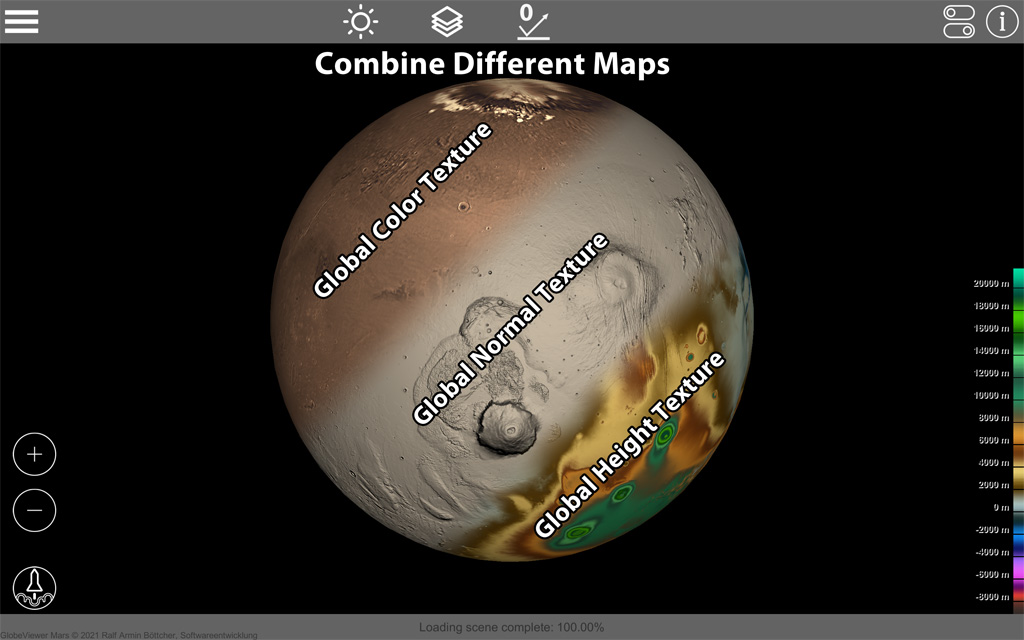 The icons in the upper right corner allow you to customize the map display and which formations on the globe should be shown with names. The info symbol opens the available detailed information on the formations and allows you to search for parts of the name. Zooming in closer to the globe also shows the names of smaller formations. 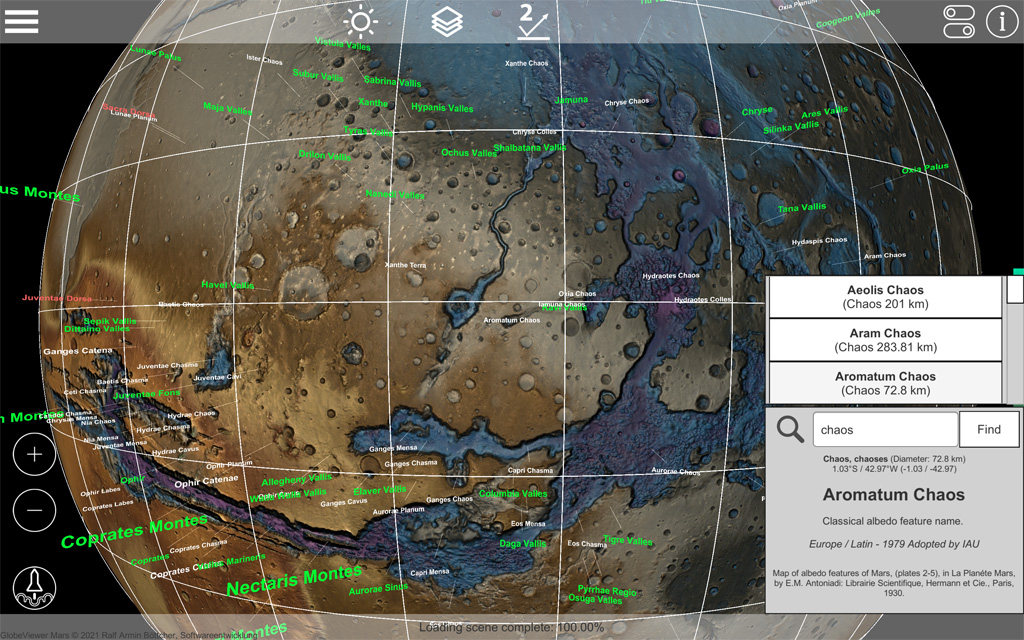 The local maps show a certain area with a much higher resolution and above all as a real 3D model. Explore the well-known formations from all directions. Here, too, you can switch the texture to the 4 different map modes, e.g. to get a better impression of the height differences. 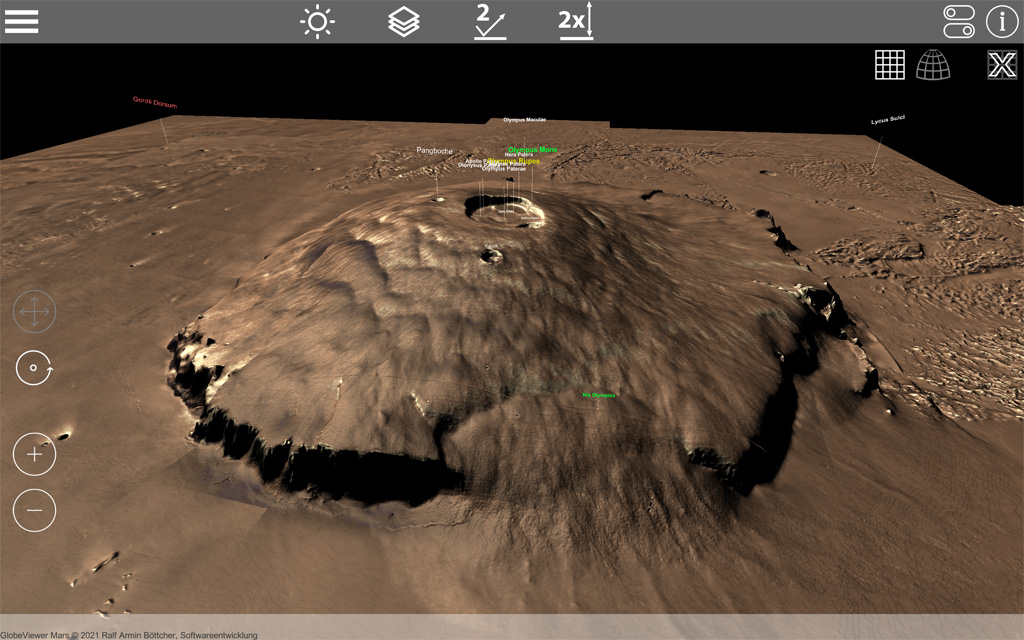 Since version 0.4 we show the landing region of NASA's Mars2020 mission. The extra high-resolution landing site map was generated using HiRISE data from the Mars Global Observer. Here you can see the rover's surroundings in Jezero Crater. In addition, you can increase the heights in the 3D map to get an even better impression of the height gradients. The map shows the movements of the Perceverance rover and the Ingenuity helicopter, so you can follow the current mission progress on this map. 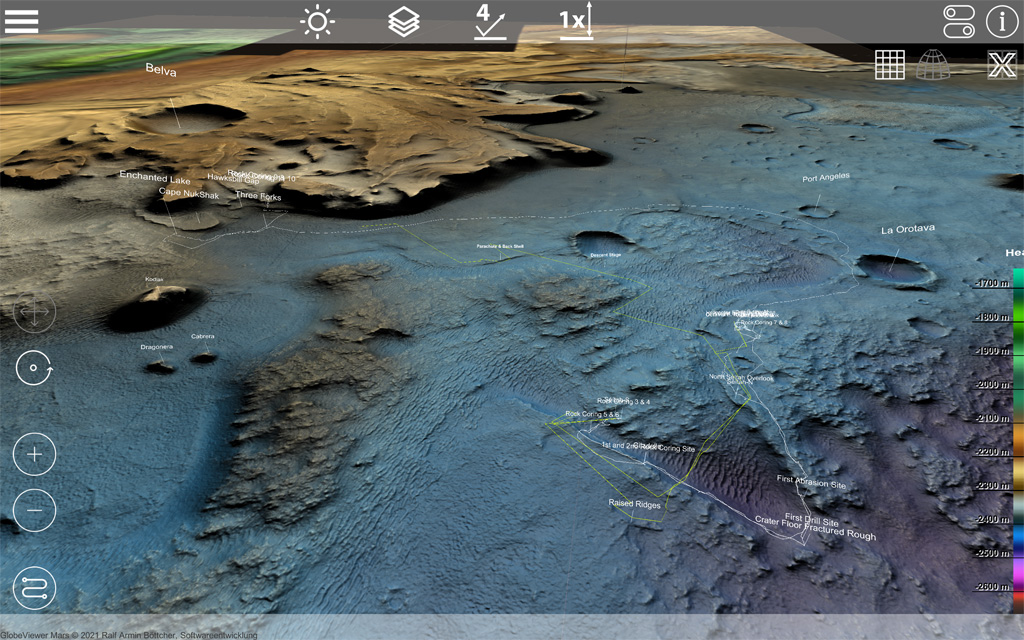 New in version 0.7 are impressive detail views created from Percy and Ingy's photos using photogrammetry. Look at the stones and rock formations as if you are right there on Mars! These great detailed views have been integrated into the M2020 history list. 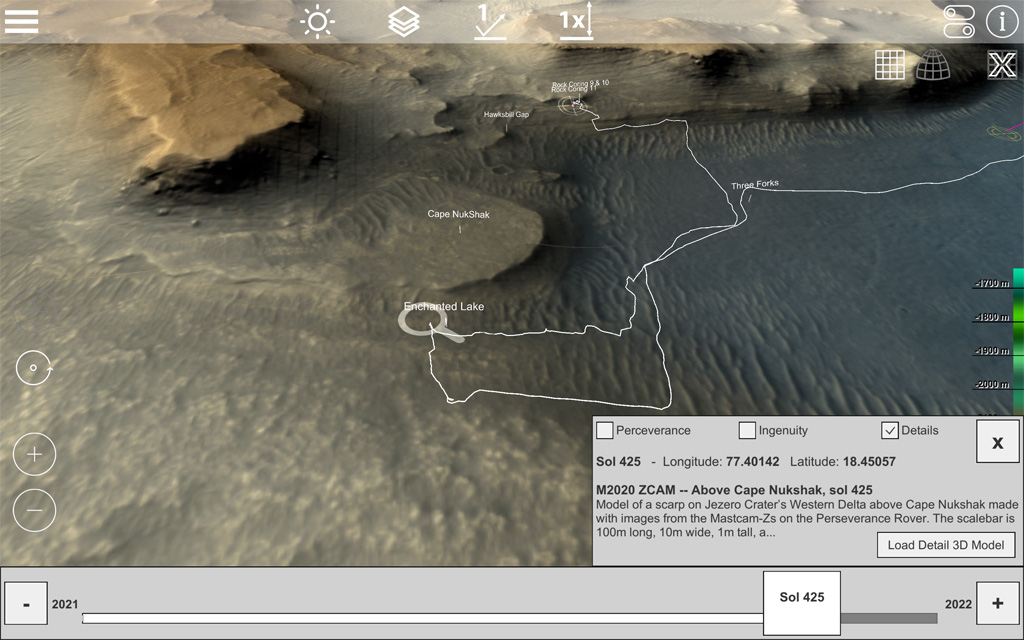 There are over 40 of these details available. Open the mission list at the bottom left. There you can click Details next to the route history of Perceverance and Ingenuity. Now slide the slider to the desired mission day. A magnifying glass shows the position of the detail or the position of the rover for that day. The button takes you to the detailed view. 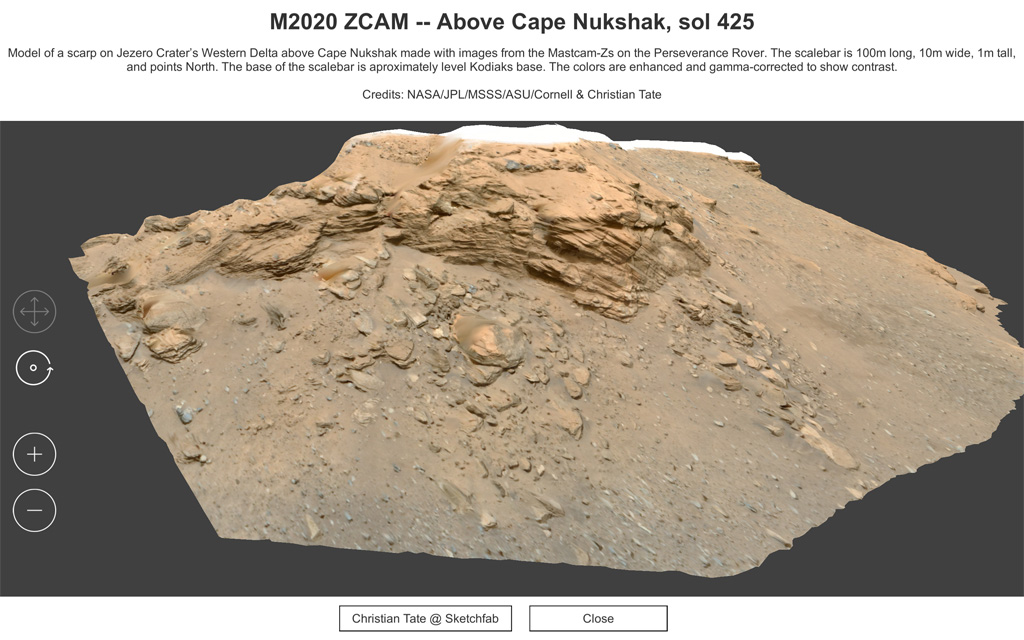 We hope you enjoy exploring the Jezero Crater virtually.

The lighting in the 3D map view is designed in such a way that the light can be directed into the craters from all directions. This serves to improve the visibility of height structures and is not intended to represent the real lighting situation. Also in the globe view, a realistic lighting, which includes the ecliptic, was omitted in favor of the visibility of the polar regions.

The app will receive regular updates in the future - this way user feedback should feed into further development. If you have any suggestions or ideas for more features in the app, please just contact us via the contact form on our website. We are looking forward to your feedback.